the famous ‘lap’ of australia

In 2018 Ashley and Anja embarked on the famous “lap” of Australia. A trusty Landcruiser and Jayco Adventurer in tow…..

In 2018 Ashley and Anja embarked on the famous “lap” of Australia. A trusty Landcruiser and Jayco Adventurer in tow saw them leave Queensland and travel west across to the Northern Territory and into Western Australia.

They hitched and unhitched the van countless times and in Lake Argyle, WA on a sloping camp site, unhitched the van forgetting to chock the wheels first. As soon as the van unhitched it moved and bent the jockey wheel so badly it ceased to work without major effort. From there it was even more of a struggle to hitch and unhitch the Adventurer.

Their travels took them down the expansive Western Australian coast line to the Great Southern where they spent a few months in what they described as Australia’s hidden secret. From there it was up to Kalgoorlie and then across the Nullabor to Adelaide, Melbourne and on to Tassy. The one-month tour of Tasmania turned into over 2 months with so much to see and do.

From there they travelled up the east coast back to Queensland completing the famous lap. Over 40,000km and hundreds of strenuous hitching and unhitching sessions.

Settling back in Brisbane in late 2019, Ashley and Anja purchased the business of Titan RV, a long-established nationwide distributer of quality Caravan and RV parts and accessories. Included in the inventory was a quantity of electric trailer jacks. Sales were slow as the jacks were designed to fit North American trailer designs. In Australia, the caravan and trailer A frames are different in design so to fit the trailer jack, a reasonable amount of welding and modifications were required. But this was an amazing solution evidenced by its huge popularity in the USA. A simple press of a button instead of all that tedious winding to hitch and unhitch the caravan. There had to be a solution.

The Black Jack has a robust 58 mm stem. As a result, it did not fit in the standard 48 mm coupling that Jockey wheels are affixed to on Australian Caravans and trailers. It could not be just “swapped out.”

Over a period of months, different methods of affixing the Black Jack to an Australian chassis were designed and tested. The end result was spectacular! The Black Jack Clamp was born.

The final design included 6 different chassis bolt hole positions, so it fits any Caravan or trailer A-Frame in Australia (6-inch, 5-inch, 4-inch or even 3-inch). It allows for multiple top-hole positions so the Black Jack can be installed facing the front, the side or the rear of the Caravan or trailer. Your choice!

It has panel recess so you can install over the top of existing wire fittings maximizing the options of where to install it on the A-Frame. Most importantly it has upper support and a lower support brackets designed to eliminate any lateral movement that may be caused by uneven surfaces.

The Black Jack Clamp has easy bolt-on installation. No additional modifications, welding or tools are required. It enjoys a tough powder coated finish and is made in Australia supporting Australian industry. It is so good that it has been registered as an Australian Design and has been patented (Australian Patent Pending No. 2020902039).

4. Set to become an Australian Icon

The Black Jack Trailer Jack and the Black Jack Clamp are set to become a fixture in the Australian Caravan and Trailer landscape due to some good old Australian ingenuity and finding a solution to a problem. Who would have thought it would all start from a good old “lap” of Australia. Paired with insanely simple to operate with an ON\OFF switch and a RAISE\LOWER switch.

Hugely popular in the USA, the Black Jack now comes complete with the Black Jack Clamp (Australian Patent Pending) that allows it to be easily bolted to the Caravan or Trailer A-Frame. 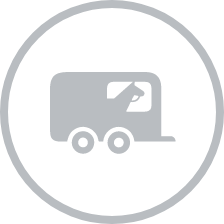 Keep the rain out! If you buy a Black Jack Trailer Jack and it turns out it is not the one that is best suited to your vehicle, do not worry.

Black Jack Trailer Jacks offers a full 14-day money back guarantee. Or we can exchange it for a different size.